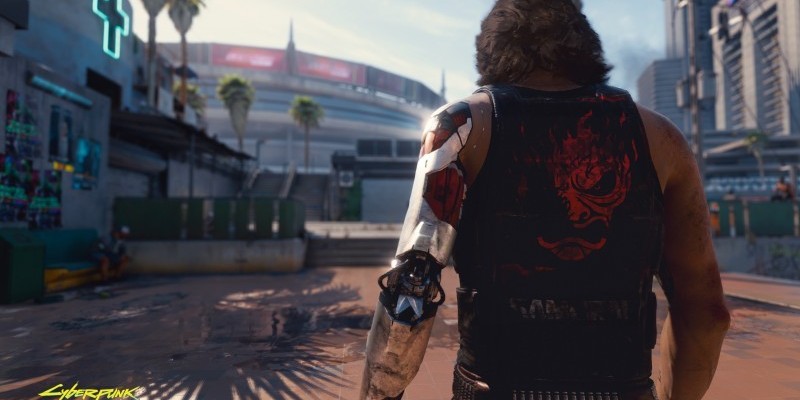 At E3 2019, there are two versions of Cyberpunk 2077. First, there’s the version that developer CD Projekt Red — best known for the Witcher series — is teasing in interviews, presentations, swag, and posters lining the walls of its promotional booth. It’s a narratively deep role-playing game set in a cutthroat world where people change their bodies radically according to the whims of employers and cultural fads, trying to survive in an economic system that objectifies and exploits them in surreal ways.

Then, there’s the thing that CD Projekt Red is showing behind closed doors: a good-looking but generic shooter-RPG hybrid with an ‘80s retro-futuristic sensibility and a grab bag of William Gibson references. The closer Cyberpunk gets to its release date next April, the more likely it seems that this will be the game’s final form. It also seems increasingly less likely to earn the moments that critics at E3 have called racist or transphobic — but that the developers say are just depicting a gritty future.

Cyberpunk’s latest demo has attracted controversy for a couple of reasons. Rock Paper Shotgun pointed out troubling racial undertones with the demo mission, where players infiltrate an abandoned mall to fight a gang dubbed the “Animals” that appears primarily composed of people of color. (CD Projekt Red later said this wouldn’t be true in the final game.) And a commentator on Twitter noted an in-game ad that seems to creepily fetishize trans women.

The Cyberpunk team says things are more complex than that. “We consider the city itself, Night City, almost the main antagonist of the game,” says CD Projekt Red senior level designer Miles Tost. “It’s not a nice place to be. It shouldn’t be a place where people go, at the end of our game, ‘I would like to live here.’”

The advertisement’s artist, for example, has told Polygon that she was trying to show corporations exploiting people’s sexuality. “People in the ads of Cyberpunk 2077 are horribly objectified, but that’s very much intentionally so,” says Tost. “Since this is a dystopian exaggeration of how things will develop, so [are] our ads — we have some really terrible ads that you look at in the game and go ‘Ah, this place is pretty fucked.’ It’s supposed to really get this reaction out of you.”

It’s possible to imagine a game that justifies this. Cyberpunk 2077 could contrast these ads with the real experience of trans and gender-nonconforming people in this future, for instance, or create a world where sexual expression is so genuinely weird that our current identity labels no longer apply. After all, this is supposed to be a place where people can change body parts constantly — to the point where (as shown in posters and trailers) some people have three mouths and others have none.

“YOU LOOK AT … THE GAME AND GO ‘AH, THIS PLACE IS PRETTY FUCKED.’ IT’S SUPPOSED TO REALLY GET THIS REACTION OUT OF YOU.”

In the actual Cyberpunk demo, though, CD Projekt Red seems to downplay weirdness at every turn. Body modification is a big part of the game, and we’re supposed to have extensive character customization options for our protagonist V. “There’s a really high degree of options for players to really build a character that they want to play,” says Tost.

The demo, however, showed us two versions of V (one male, one female) who both seemed like generic, trim-bodied video game characters with some circuitry lines around their faces; one had nondescript mechanical arms. The major non-player characters were relatively average-looking humans, too, with the exception of one ‘roided-out Animals boss. That’s a perfectly valid design approach, but it doesn’t really sell the idea that we’re in a radically different future.

The demo was simply bland in general. As previously mentioned, V has to infiltrate the base of a gang called the Animals, who are guarding a surveillance van that could spell trouble for Night City’s underworld. V is trying to ingratiate him- or herself with a different gang called the Voodoo Boys, since their leader could help V learn more about a mysterious brain chip that apparently holds the secret to immortality. That chip also contains the digital ghost of a helpful character named Johnny Silverhand — who is essentially a clone of Keanu Reeves in mirrored shades and leather pants.

These are all fun ideas, but the main mission’s gameplay was largely a reskinning, albeit an unusually gruesome one, on average immersive sim-influenced gameplay. The female “strong solo” V could pull open doors with her arms. The male netrunner could hack cameras to turn them off, hack robot boxers to attack their partners, or hack people’s mechanical limbs to make them kill themselves. But it felt more like a series of scripted events than an organic system that you could learn and exploit. I didn’t see the kind of complex level design that games like Deus Ex or Hitman have excelled at, and despite their very different powers, the gameplay vibe for both Vs felt similar. They’d generally walk around a series of large spaces shooting and strangling people either loudly or quietly, sometimes opening a door or hacking an item in a unique way.

The full game might feel better fleshed out. “We’re doing everything we can to make sure that the variety here is as high as possible,” says Tost. That includes adding dialogue role-playing options; players can select a background like “street kid” or corporate defector and gain access to special conversation trees. Again, though, the demo didn’t really show us how rich those are — the options there seemed limited to asides that might give you a little bit of extra information, not the kind of full-fledged unlockable paths that games like Harebrained Schemes’ Shadowrunseries offer.

Don’t get me wrong, I love the idea of sneaking around abandoned malls and hanging out with the leather-clad ghost of Keanu Reeves. And I love some of the game’s ideas, like characters you can’t talk to until you’ve gotten the correct translation software. But so far, everything points to Cyberpunk 2077 being a by-the-numbers open-world role-playing game with some unusually cool, but disappointingly underexplored lore and aesthetic motifs. And if that’s true, then it’s hard to imagine the game really earning its moments of edginess.

Tost says the game is broadly trying to be inclusive and not make players feel unwelcome. The idea of being gay or straight in the world of Cyberpunk 2077 is “basically is a non-issue,” for example — “now that I think about it, maybe that’s actually one of the aspects of life that might have been better than here [in the present].”

He acknowledges, however, that it can be tricky to depict bigotry or oppression as part of a fully realized world, rather than just seeming to throw it in players’ faces. “We can’t allow for ourselves to make things look like an accident,” he says. “If you show that the choices are being made deliberately to bring context to the world and explain a certain situation or circumstance in the society and the world as a whole, I think that’s something that players can pick up on and understand.”

I’d love to see CD Projekt Red actually pull that off. I just personally haven’t seen that larger dystopian world established beyond (sometimes literal) window dressing. This isn’t a problem unique to Cyberpunk 2077;it’s something that a lot of big-budget games struggle with. The Deus Ex series, which is set in a similar cyberpunk world, tried to explore oppression with an ill-advised “mechanical apartheid” storyline. But the theme was a terrible fit for a cyborg power fantasy. Cyberpunk 2077’s dystopia doesn’t seem quite so on-the-nose, but it also seems to be playing with heavy themes without truly delving into them.

The more directly a game (or movie, or book) evokes real, ugly social problems, the more carefully it needs to approach them. That’s the difference between exploitation and commentary — and Cyberpunk 2077 hasn’t shown that it’s deep enough for the latter.

Advertiser and author @TechDomes. View all posts by John Manor

This site uses Akismet to reduce spam. Learn how your comment data is processed.