Galaxy A7 vs. Galaxy A9: Know Which Samsung Phone Is Better

Galaxy A7 vs. Galaxy A9: Know Which Samsung Phone Is Better

Galaxy A7 (2018) and Galaxy A9 (2018) smartphones are two of the handsets of Samsung, which has made some changes in the company’s strategy. The company has launched new variants of its mid-range Galaxy A series and has created new competitors in the market. Galaxy A7 and Galaxy A9 are the first Samsung smartphones launched with triple or quad cameras. These phones have managed to make their space between users. Both these phones have many similarities in the design and camera case.

Galaxy A7 vs. Galaxy A9: Price

Galaxy A7 vs. Galaxy A9: display

Galaxy A7 vs. Galaxy A9: Camera

Triple camera setup is present in the Galaxy A7. It has a 24 megapixel autofocus sensor that comes with f / 1.7 aperture. At the same time, 8-megapixel ultra-wide sensor with f / 2.4 aperture and a fixed sensor of 5 megapixels (f / 2.2 aperture) with fixed fox has been given. Speaking of selfie camera, the phone has 24 megapixel front sensor with f / 2.0 aperture. There are also features like LED Flash, Selfie Fox, AR Emoji and Pro Lightning Mode.

At the same time, there are four rear cameras in the Galaxy A9. Its main camera is 24 megapixels, its aperire f / 1.7. The second is a telephoto lens with 2X optical zoom, 10 megapixels A and F / 2.4 aperture. The third is 120 degrees, 8 megapixel sensor and ultra-wide lens with aperture /2.4. At the same time there is a 5-megapixel depth sensor with the fourth f / 2.2 aperture. Speaking of front camera, it has a 24-megapixel sensor with f / 2.0 aperture.

Galaxy A7 vs. Galaxy A9: Other specifications 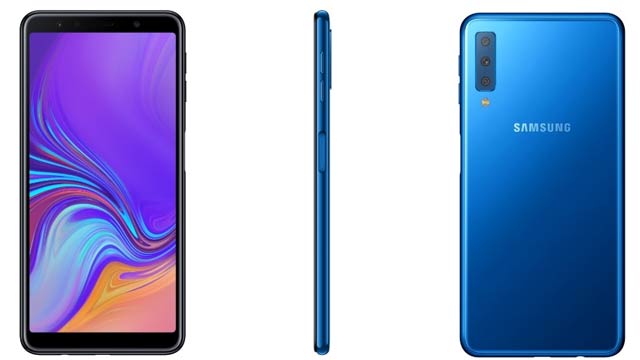 Galaxy A7 is equipped with 2 GHz octa-core XConos 7885 processors. Its internal memory can be increased to 512 GB via microSD card. To give power to the phone, 3300 MAH batteries can be given. Also, it will be supported by Bixby, Samsung Pay, Samsung Health and Dolby Atomas.

Galaxy A9 is equipped with 2.2 GHz quad + 1.8 GHz quad-octa-core Qualcomm SDM 660 processor. It has 6 and 8 GB of RAM. Plus 128 GB internal storage is also available. Its internal memory can be increased to 512 GB. This phone works on Android 8.0 Aero Additionally, 3800 MAH battery is provided which supports Fast Charging and USB Type-C charger.

Galaxy A7 vs. Galaxy A9: Which phone is better to buy

If compared to the two phones, the Galaxy A9 is much better. If you are looking to buy a good device with Snapdragon 660, you can give the Galaxy A9 a special look. The Galaxy A7 smartphone can prove to be an economical decision in a cheap Rs 10,000. There is a complete processor and amoled display. But if talked, the battery is much better than the Galaxy A7’s Galaxy A9 battery.