The e-commerce company Flipkart has organized Flipkart Honor Days Cell in collaboration with Chinese smartphone company Honor. This cell will last between November 26 and November 29. The three-day running cell offers discounts on select smartphones of Honor. Big Billion Days Cell has just ended last week. In this cell too many discounts were being offered on smartphones. Let us know that Honor 8C will also be launched in India this week. Let’s know the discount on which smartphones are being offered in Flipkart Honor Days Sale.

Honor 9 Lite is one of the company’s best-selling devices in India. You can buy this phone at a price of Rs 9,999. This is the lowest price of this phone so far. Speaking of the features of this phone, it has been given a 5.65 inch full HD + display. Talking about the processor, it has got 3GB RAM and 32GB internal storage with the Octakr Kirin 659. Talking about the camera features of the phone, it has 13+ 2 megapixel dual rear and front camera. The phone supports 4G VoLTE and works on the Android Orio 8.1 based EMUI. To give power to the phone, it has a battery of 3,000 mAh.

A discount of 11,000 rupees is being offered on this premium smartphone. This smartphone was launched at a price of Rs 35,999. This phone can be purchased at Rs. 24,999 in Flipkart Honor Days Sale. Talk about the features of this premium smartphone, it has a full HD Plus display of 5.84 inches. Equipped with the Kirin 970 chipset processor, this smartphone has a great camera feature. In addition to the 24 + 16 megapixel dual rear camera, 24-megapixel selfie camera has been given in the phone. The phone supports 4G VoLTE and works on the Android Orio 8.1 based EMUI. To give power to the phone, it has a battery of 3,400 mah.

You can buy the Honor 7S at a price of Rs 5,999. The smartphone, which is priced at Rs. 8,999, is offering a discount of Rs. 3,000 on this smartphone. A discount of 33 percent is being offered on this entry level smartphone. Talking about its features, it has a 5.45 inch Full HD Plus display. The phone has been given the MediaTek MT6739 Chipset Processor. The phone comes with 2GB of RAM and 16GB of storage. Talking about camera features, it has a 13-megapixel rear camera and a 5-megapixel front camera. The phone supports 4G VoLTE and works on the Android Orio 8.1 based EMUI. To give power to the phone, it has been given a 3,020 mAh battery 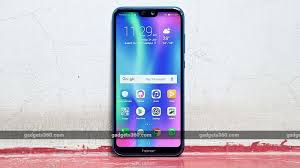