Nokia 8.1 smartphone is expected to be introduced at the launch event of HMD Global on December 5. The teaser of the Red Color Variant has been released before the official launch. The Finnish company has published its teaser. There are speculations that Nokia 8.1 will actually be the global variant of Nokia X7. The handset is expected to be 6.18 inches full-HD + display, 18.7: 9 aspect ratios and Octa-core Qualcomm Snapdragon 710 chipsets. It has a 20-megapixel selfie camera with F / 2.0 aperture with dual rear camera setup.

A teaser video was released from Nokia Mobile India’s official Twitter account, which points to the launch of the Nokia 8.1. The 9-second video did not get a glimpse of the smartphone. But it has been used in the pictures of red rose photographs. The outline of the Nokia 8.1 handset is definitely done in the video.

According to MySmartPrice, Nokia Mobile India’s latest teaser is pointing to Nokia 8.1’s red color variant. The Indian avatar of Nokia 8.1 will come with a slightly ultra-night-red option.

HMD Global is expected to launch Nokia 8.1 on an event in Dubai on December 5. It can also be curtained with the Nokia 2.1 Plus and the much-awaited Nokia 9. The claim is that Nokia 8.1 will actually be the global variant of the Nokia X7 launched in China last month. This phone was listed on Geekbench’s site last month. Its specification is Nokia X7. However, this handset was equipped with Android 9.0 pie. 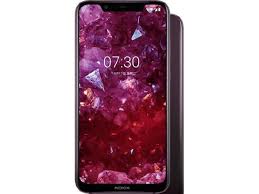 If Nokia 8.1 is indeed a global variant of Nokia X7, then the specifications of both models will be identical. Nokia 8.1 out of box will run on Android Pie. The smartphone will have a 6.18 inch full-HD + display and its aspect ratio is 18.7: 9. The smartphone is expected to provide 4 GB / 6GB RAM and 64 GB / 128GB inbital storage with the Octa-Core Qualcomm Snapdragon 710 processor. The handset can support up to 400 GB microSD card.

Nokia 8.1 can have dual rear camera setup. The primary sensor will be 12 megapixels and it will be equipped with a 13 megapixel secondary camera. This is a fixed focus sensor. There will be 20 megapixel camera with F / 2.0 aperture for selfie and video calling. The battery can be of 3,500 mAh